I met Christian Eisenberger when he was looking for a place to sleep in Basel many years ago. He stayed in my apartment for a few days. He wanted to explore ART Basel, understand the hype behind this art fair, why the whole art world goes crazy when galleries and collectors from all over the world meet every year in June for a few days in my hometown.

I was fascinated by the coexistence of anonymous art on the street and art that could be purchased in the context of an art fair. Like many others, I became a fan of Eisenberger's cardboard figures. Even many years later, after Christian had stopped producing these cardboard figures, to me, he remained the artist with the cardboard figures. My nostalgia towards this long-gone era clouded my view of his current work. In contrast to his early cardboard work, Eisenberger's current work provoked me and left me at a loss. But my curiosity remained and my desire to understand his work is propelling me forth.

Looking back, I think humans instinctively stick to what we can name and classify, out of a sense of familiarity. We have a tendency to categorize things. There is a great temptation for artists to create content that fits into those categories and to meet the expectations of others. Eisenberger resists this. He always wants to create something new and surprising. And I am constantly asking myself: What is that?

Initially, I would stand helpless before the universe of individuals like Eisenberger, but now it becomes increasingly fun for me to get involved in it. I see this as a great source of satisfaction and meaning: that my brain and my heart are concerned with things that lie far outside of myself and that keep me awake.

With Eisenberger, there is additionally something very decisive. His art exists above all within a context. The cardboard works are a perfect example of how a work gains in significance and expressiveness through contact with its surroundings: some throw the work away, others collect it on the street, and others buy it at auctions and from dealers. Is it art or garbage?

This context can also affect the viewer: a drawing or caricature can cause a huge uproar. Depending on what is depicted, the authors can receive death threats. At the same time, provocation has become an overused trick in the creation of art. Nudity, violence, and blasphemy are part of the standard repertoire.

How can artists find their bearings within all of this? This question has become the leitmotif of my film. The longer I have observed Eisenberger, the more a triangular constellation has emerged between the artwork, the artist, and the audience.

If I wanted to create a fiction film, it would be set in a garden. In this garden, an artist paints. There is a fence around the painter. People are watching him from the other side of this fence. If the painter places the fence too far away, people can no longer see the picture, which the painter would not want. If the painter places the fence too near, he does not have sufficient room to focus and is overwhelmed by the crowd. So, while he is painting, he must constantly pay attention to the distance between himself, the painting, and the audience. The painting is at the center, but everyone is pushing around the fence. 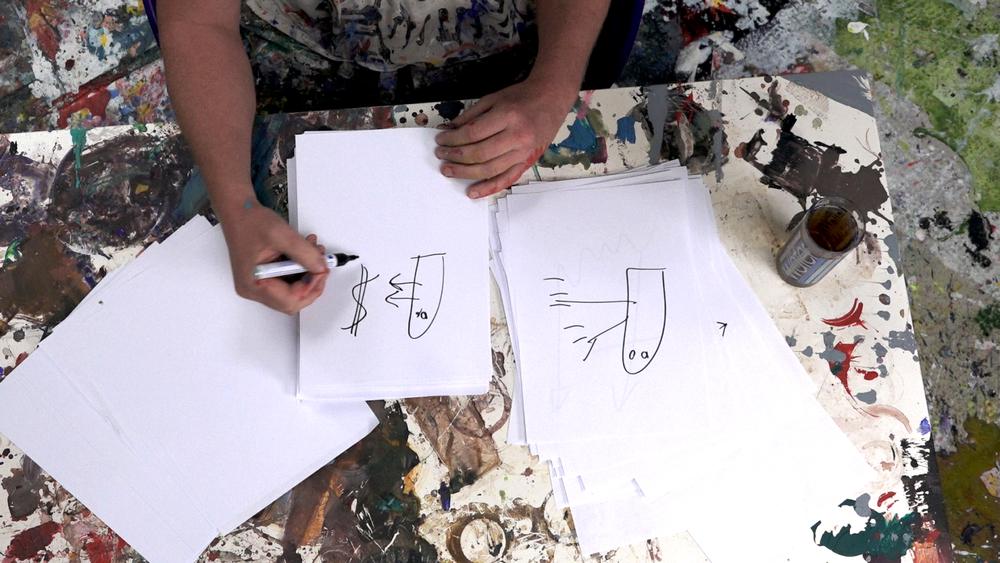 Where does artistic freedom begin and where does it end?
Through Austrian artist Christian Eisenberger we experience the daily pressures felt by artists to be unique and to live up to the expectations of others.
Read story